The Terror of Evil-Doers:
The Story of Neptune 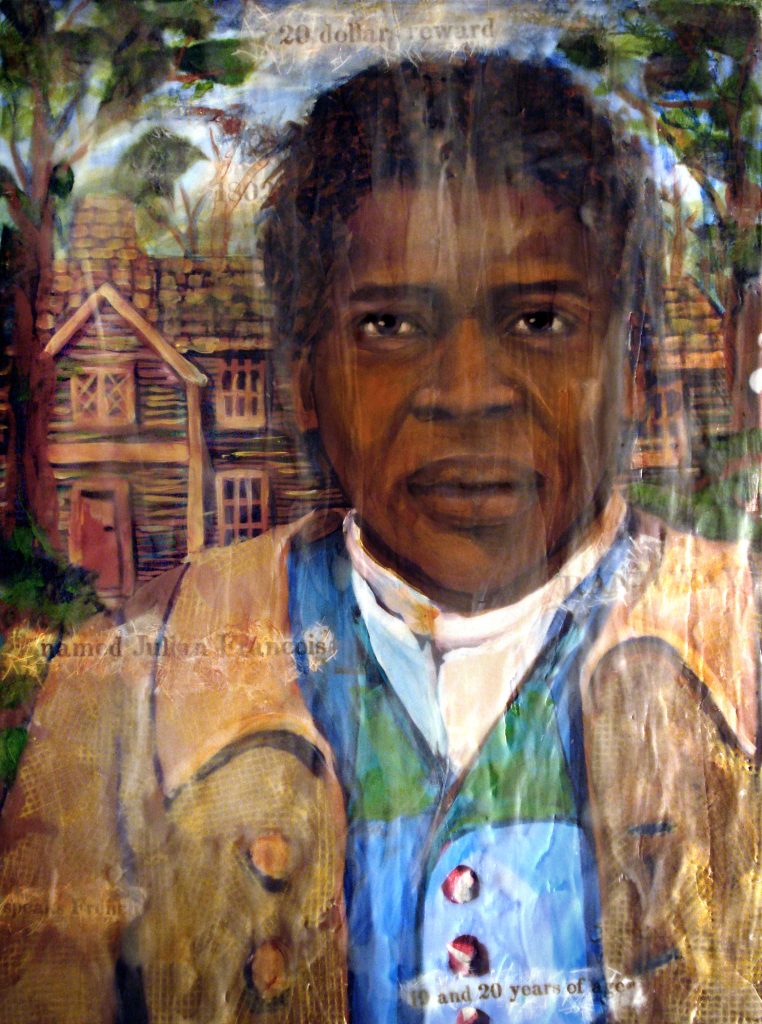 Neptune is a man who lives on in Connecticut folk tales. The real man was enslaved by Mary Olivey, and later manumitted with his wife, Priscilla, in 1760. Olivey provided Neptune with tools to earn a living as a barber and in 1767 he was admitted as an inhabitant of Hartford, a status that gave him rights and obligations alongside his fellow colonists. Neptune, though, was subjected to racial tension and mockery. According to legend he was a “Black Sheriff,” an assistant to the Black Governors whom enslaved people elected to a largely ceremonial and symbolic office in the eighteenth century. In the 1780s tall tales circulated about Neptune being the “Terror of Evil-doers.” It is difficult to know the amount of fiction that makes up the life story of the historical Neptune. The narratives state that Neptune chastised reprobate enslaved people by candlelight on the South Green. For example, one story claims that he disciplined a slave for stealing by giving him thirty lashes across his back, taking away his tobacco for thirty days, and forbidding him from using his gun. He was portrayed as a black sheriff who over-punished fellow black people to instill fear into them, so they would act according to the laws established by white colonists.[1]

The colonists created the positions of Black Sheriff and Black Governor to control the enslaved people, although black people often used these customary offices to resist white oppression. Black sheriffs were selected for their position by the black governor, who had to be approved by the white colonists. Once in their job, their duties were to punish both enslaved and free blacks who disobeyed the laws. Owners thought that if a black man reprimanded other black people they would not have a reason to rebel. Moreover, masters created stories about Neptune to make him scary enough that the people they held captive would abide by the rules.[2]  When Neptune was called a “Terror to Evil-doers,” the writers were mocking both him and the members of his community.  The “evil-doers” in the eyes of the white storytellers were the enslaved and freemen who disobeyed the colonists’ laws. The “Terror” was another African American who carried out the colonists’ punishments. Neptune’s story was used only to instill fear into the slaves so that they would act correctly and submissively. No stories from the captive community remain to give their side, although the records reveal a tenderness and generosity on the part of Neptune. When a Native woman died in 1758 and there was no money for her burial, he took it upon himself to purchase a grave for her.

The real Neptune was a husband and father who suffered the loss of many of his own children. Priscilla predeceased him by four years. She died of consumption, or what we now call tuberculosis, in 1792. Neptune died of dropsy, or what we now call edema. Whatever kind of sheriff whites thought Neptune was, his role as a barber established him as an independent man of means. The Connecticut poet, John Trumbull, wrote a satirical poem about barbers, making fun of their elegant dress and their wigs. The poem belies the power and stature men like Neptune exercised in their communities, and the fear whites felt when they encountered such men.[3] It is much more likely that Neptune was a respected and valued member of Hartford’s black community than the legends allow.

[1] George S. Roberts, Historic Towns of the Connecticut River Valley, (Schenectady: Robson & Adee, 1906), 218; Isaac William Stuart, W. M. B. Hartley, ed., Hartford in the Olden Time: Its First Thirty Years, (Hartford: F. A. Brown, 1853), 43-44; and William Franklin Henney, “The Building of a Model Municipality: the Story of the Laying of the Foundation for a Civic Structure Embodying the Principles of Judicious Self-Government, Good Citizenship and Material Prosperity – First Part of Important Article on the Development of Hartford,” The Connecticut Magazine, Volume IX, No. 1, 1905. 563.