The Runaways:
The Story of Dige, London and Tack

By Allison Golomb; edited by Katherine A. Hermes 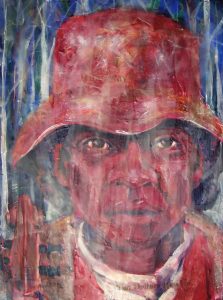 Native-American and African-American enslavement was a constant part of New England colonial society from its inception in the seventeenth century to its abolition in the nineteenth century. From the start of the slave trade captive people attempted to escape to claim their freedom. Some of the enslaved left to find loved ones who were sold or bequeathed to other masters, while others sought their own liberty. Although many runaways were caught and returned, enslaved individuals continued attempting to escape. Often they did not get very far. Masters were able to harness the hegemony of the law to make sure that the colonial government protected their interests. Masters could ensure indentured servants, captive Indians and enslaved blacks had little access to the courts to protest their bondage or its conditions, but those in bondage could protest by being unruly, by engaging in work sabotage and by running away.[1] Runaways comprised the most common form of resistance, and as historian Guocun Yang noted, the escapes offered “a commentary” on what local antiquarians sometimes labeled a “‘benign’ institution in Connecticut.”[2]

Connecticut enacted a law in 1690 specifically designed to curb the problem of runaways. It prohibited a slave from traveling without a pass outside the town borders in which his or her owner resided. Anyone assisting runaways could be fined twenty shillings. Free blacks also needed to obtain a certificate from authorities to prove they were not runaways.[3] Innkeepers and tavern owners were also prevented from serving alcohol to “apprentices, servants or negroes” without permission from their masters.[4] The colony was tightening its reins on the population in bondage. 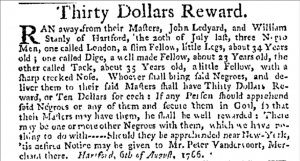 London, Dige and Tack Runaways from Ledyard and Stanly, 1766

Early in the colonial period, messages of escaped slaves were passed by word-of-mouth.  Although the orally transmitted information helped catch many fugitives the descriptions could be vague and unreliable, and the method was slow.  Newspapers changed all of this by aiding in the capture of runaway slaves.  The advertisements reached a larger number of people more quickly. Masters put advertisements in both local and national papers that described the runaways’ physical characteristics, clothing they were wearing, their professions and/or the tools they may have carried. They often added details about whether the fugitive spoke English or had distinguishing marks like scars.[5] Although the South had a larger population of enslaved people, between 1730 and 1750, New England masters were twice as likely to run advertisements for runaway captives than their southern counterparts.[6]

In July of 1766, three slaves from Hartford named Dige, London, and Tack, ran away from their masters. At that time the Connecticut Courant, a newspaper in its infancy at only two years old, ran the advertisements paid for by the slave owners, John Ledyard and William Stanly. That ad described the fugitives as “London, a slim Fellow, little Legs, about 34 Years old; one called Dige, a well-made Fellow, about 23 years old, the other called Tack about 35 years old, a little Fellow, with a sharp crecked Nose.”[7]  Ledyard and Stanly offered ten dollars reward for each of the men returned or thirty dollars reward for all three. London and Dige were likely captured and returned to Ledyard; they were listed in Ledyard’s estate inventory when he died in 1771. Occasionally, masters were so sure of their ability to obtain their runaways that they bequeathed them to their heirs, expecting their return.[8]  Tack was most likely captured as well, but his whereabouts were not recorded after that advertisement ran.  These three were not the only ones to escape from the Hartford area, nor were they the last.  Slavery and attempts to escape it continued in Connecticut even with the passage of a gradual emancipation law in 1784. It was not until 1848 that the state completely abolished slavery.[9] The men, women and children who ran from bondage risked unknown hardships if they succeeded in escaping and often brutal corporal punishment if they were caught. Their daring underscores the importance of personal freedom to them, despite the risks.