The Rate Payer:
The Story of Japhet

In 1631 the Wangunk Grand Sachem (Chief), Sowheag, sent Wahguinnicut, a Native envoy, to Plymouth and Boston to ask the colonial governors to send men to settle on the Connecticut River. When the English settled Hartford (the Wangunk town of Suckiog) in 1637, they purchased their land from Sowheag (also called Sequin) and his son, Sequassen.[1] The Native people kept areas in the North and South meadows, where they placed their wigwams. The South meadow was near the Dutch fort, House of Hope. The Wangunk had many villages, including Pyquag (Wethersfield), Nyaug (Rocky Hill), and Wongug (Middletown), among others. Members of the tribe remained in Hartford even after the English settled there.

In 1637 a fierce war broke out between the Massachusetts and Connecticut Colonies on one side and the Pequot Tribe on the other. When the war was over, the Pequot nation was shattered. The treaty signed in Hartford in 1638 even forbade people to use the name “Pequot.” Colonists transported adult male Pequot captives to the Caribbean, to Providence Island and Bermuda. Pequot boys younger than twelve, girls and women were divided as spoils between the colonists and their Native allies, the Mohegan.  Some of these captives became servants in Hartford. The children were often freed when they reached their early twenties. A riot of “Indians and Negroes together” in 1658 makes clear that indigenous people were a presence in Hartford.[2]

Japhet, an Indian man, first appears in the records of Hartford on February 13, 1658/59, when he was listed among the ratepayers (property taxpayers) in the South End. He probably lived where Wells Street is now. He was among the poorest of the ratepayers, including Pater Hogan, a Dutchman, and the Widow Watts.[3] He may have been a Wangunk who moved from the wigwams of Suckiog into a house in town, a freed Pequot captive who received freedom dues, or a member of a nearby tribe like the Podunk or Tunxis. Somehow he purchased a small dwelling. In 1659 he was probably a young man. Native men found employment in Hartford, sometimes working in the warehouses near the Connecticut River or as laborers on farms. 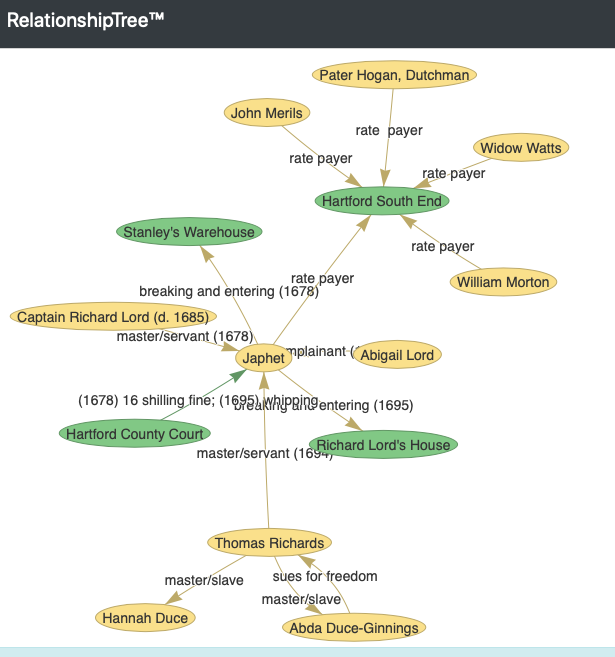 It was not unusual for men freed from indentures to find themselves working again as servants.[4] In 1678, the next time Japhet appeared in the colonial records, he was called “Mr. Lord’s Indian,” indicating that he worked for Mr. Richard Lord in some capacity.  Japhet was caught breaking and entering into Nathan Stanley’s warehouse through a window, stealing boxes and pipes. The Hartford County Court punished him with a fine of 16 shillings, or the equivalent of about 4 bushels of wheat. Mr. Lord had to make the first payment, and Japhet the second, “when his time is out,” i.e. when his contract was up. Lord, one of the wealthiest merchants of his time, was engaged in the slave trade and had a plantation on Antigua, yet he still employed Indian servants.[5] Japhet’s next employer was Thomas Richards, a man who owned enslaved Africans, including Hannah Duce.

There is no death record for Japhet, but if he died in Hartford as a resident or inhabitant of the town, he would likely have been interred in its burial ground. When Sowheag made his bargain with the English colonists, he envisioned a bicultural community in which Native and English would live together, though he assumed it would be on his terms, not theirs. The Pequot War shattered any ideas of an integrated community living on equal terms with one another. The indigenous people did not disappear, though. Some Native men found employment among the English and settled with them. Why they did so is not clear. Japhet’s occasional brushes with colonial law suggest his life among the settlers was far from easy. A status of inhabitant, however, was rarely conferred on “strangers,” suggesting that the townspeople accepted him as one of their polity. Relationships between people are complicated, and even under repressive regimes, members of minority populations can form bonds with those who create the very structures that oppress them. Japhet’s story is incomplete, because there are not enough records to flesh it out. What we see from the extant sources, though, is a long life spent in and out of freedom in a complex, colonial environment.

[3] Original Distribution of the Lands in Hartford Among the Settlers, 1639 (Hartford: Connecticut Historical Society, 1912), 498.