In the colonial era taverns were the center of a town’s political and social life. Today “tavern” is just another word for a bar or restaurant, but in the past it was an inn that served food and drink to both locals and travelers who stopped in to spread news and gossip.[1] Business dealings occurred there as well.[2] Merchants sold and bartered some of their goods and bills of sale records were kept there. Town officials hung new ordinances and laws on the buildings’ walls, as taverns were popular places.[3] Laws banned tavern owners from serving Indians and blacks, though some did so anyway. Most Natives and Africans, though, had to find their social enjoyment outside of taverns. 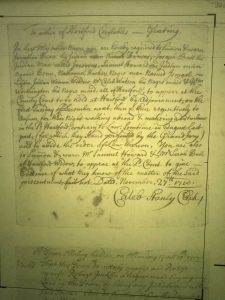 In November of 1710, a group of indentured Indians and enslaved Africans was arrested for “night-walking” and causing a disturbance. One of the nightwalkers, a Native man named Drusus, belonged to Jonathan Bunce. Not long before, Drusus had been willed to Bunce by his father-in-law, Zechariah Sanford, along with a white indentured servant or apprentice named James Jarrell. Now Drusus and the other night-walkers were being tried at a court held in the Bunce tavern at the corner of King Street (now Main) and Central Row, across from the meetinghouse.[4] Along with Drusus, the sheriff arrested “Joseph Bull’s Indian man named Jecovons, Samuel Howard’s Indian man named Benn, Nathaniel Hooker’s Negro man named Ismael, an Indian woman named Lydia (a widow), Mr. Caleb Watson’s Negro maid and William Washington’s Negro maid.”[5] Noticeably, James Jarrell was absent from the group of offenders. The arrest tells us a great deal about how enslaved and indentured people formed community.

Jonathan Bunce was married to Susannah Sanford (also spelled Sandford), and Bunce had inherited his tavern from his father-in-law, Lieutenant Zachariah Sanford, who had also leased it to the Colony for its court hearings.[6] Bunce’s sister was married to Samuel Howard, Benn’s master, who lived at the intersection of King (Main) and Elm Streets. Benn had been in trouble before for threatening Thomas Andrews with a knife. Caleb Watson, the school teacher in Hartford until 1705, lived near the schoolhouse on Main Street, near the tavern. Joseph Bull, Samuel Howard and Robert Sanford all owned the same piece of property, which they passed on seriatim to one another.[7] The masters and mistresses of the accused night-walkers were also in a close circle of kinship and friendship. 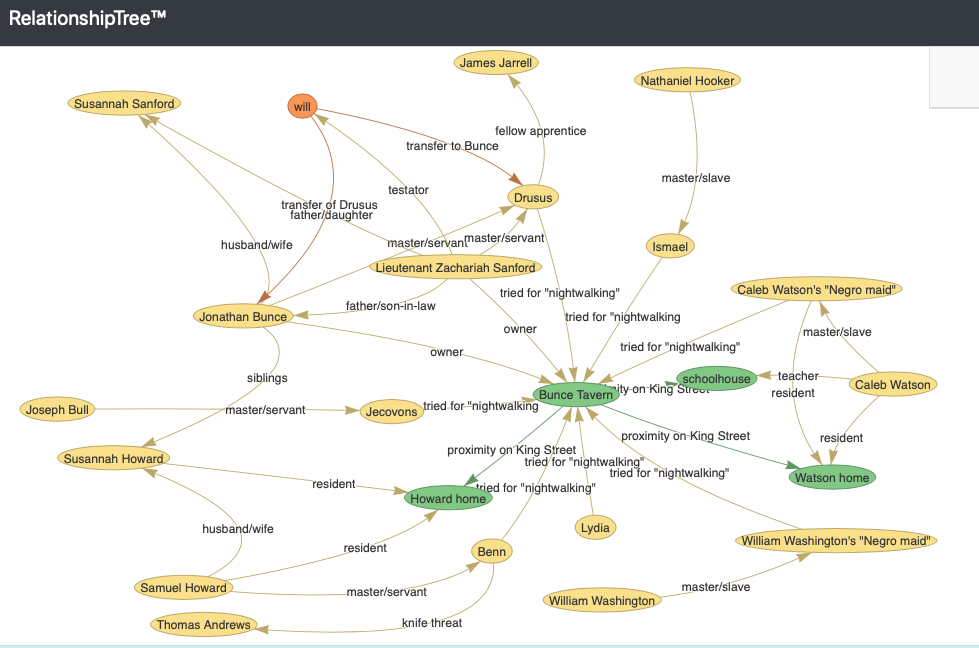 Drusus and the Nightwalkers Relationship Tree

Shortly after Jonathan inherited Drusus and the tavern, the court moved to Caleb Williamson’s tavern.  Court proceedings stayed at Williamson’s Tavern for a short period of time until a permanent State House was built.[8] The Bunce family later owned another tavern, The Black Horse (also known as Flagg’s Tavern), which was widely known in the surrounding area.[9] The mingling of indentured, enslaved and free people of color was not an unusual event in Hartford. They formed friendships, intermarried and sometimes they got a little wild and had a party together in the streets of Hartford. Yet their relationships were neither random nor freely chosen. Their ability to associate with one another often depended on their masters’ and mistresses’ own networks. And for any fun they had, they often paid dearly.

[3]George L. Clark, A History of Connecticut: Its People and Institutions (New York: The Knickerbocker Press, 1914), 256.