Colonists of Color:
The Moore Family 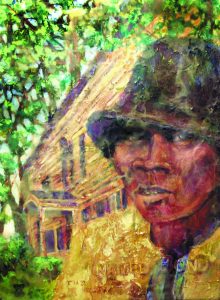 In 1730 Phillip Moore III sold a parcel of land in Hartford, Connecticut, to Captain Thomas Seymour. Nothing about the transaction was unusual except that Phillip was a man of African descent whose father and grandfather before him had owned that land. As the acres passed out of Phillip’s hands into those of the English Seymour, the Moore family’s holdings in Hartford came to an end.[1] 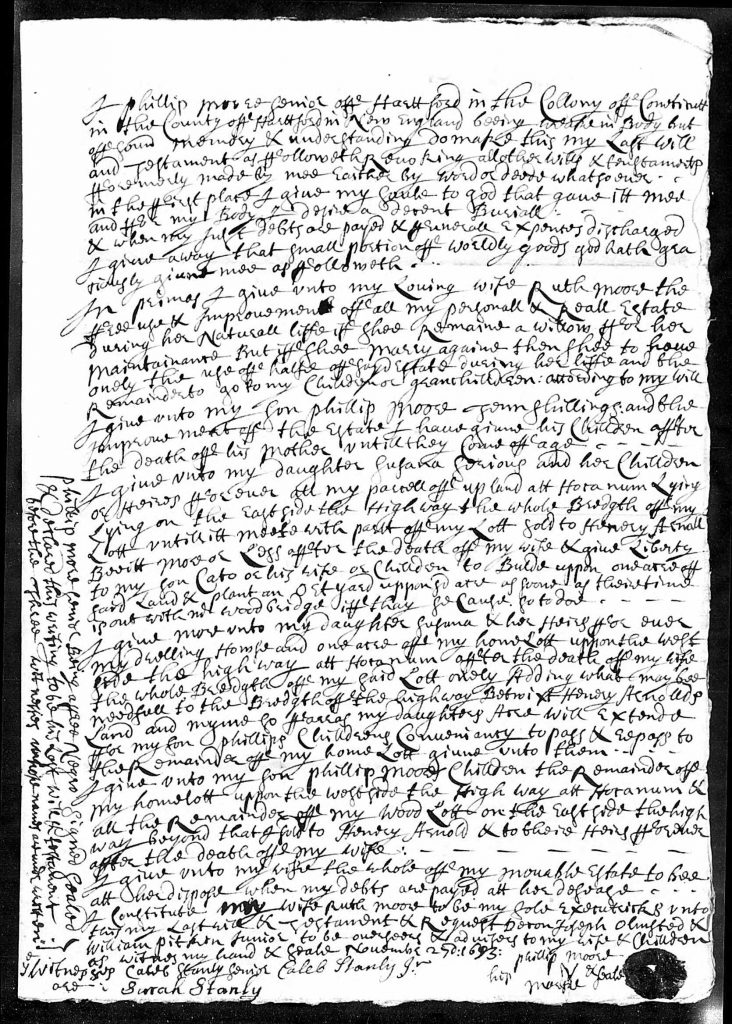 Theirs had been a long tenure. When the first Phillip Moore came from Africa or the West Indies to New England, he was probably enslaved. Before long, though, he owned land, first appearing in the land records during King Philip’s War in 1676. First, he sold a parcel of land to Henry Arnold, and then he purchased one from Nathaniel Willett. How he came to be a landowner is unknown; perhaps it was for service in the war, or perhaps he earned it through his labor or inherited it by a will no longer extant. He was at that time a man with a family. It is possible that he was married twice, but the records only give us the name of one wife, Ruth. By the 1680s his son, Phillip, possibly by his first wife, was getting in trouble with the law for stealing. The crimes were minor, but Phillip, Jr. found himself entangled in legal conflict with Captain Bull and Thomas Harris over a two-year period. Eventually, though, young Phillip settled down and married Lydia, with whom he would have five children, Phillip III, John, Sarah, Lydia Jr., and Priscilla. 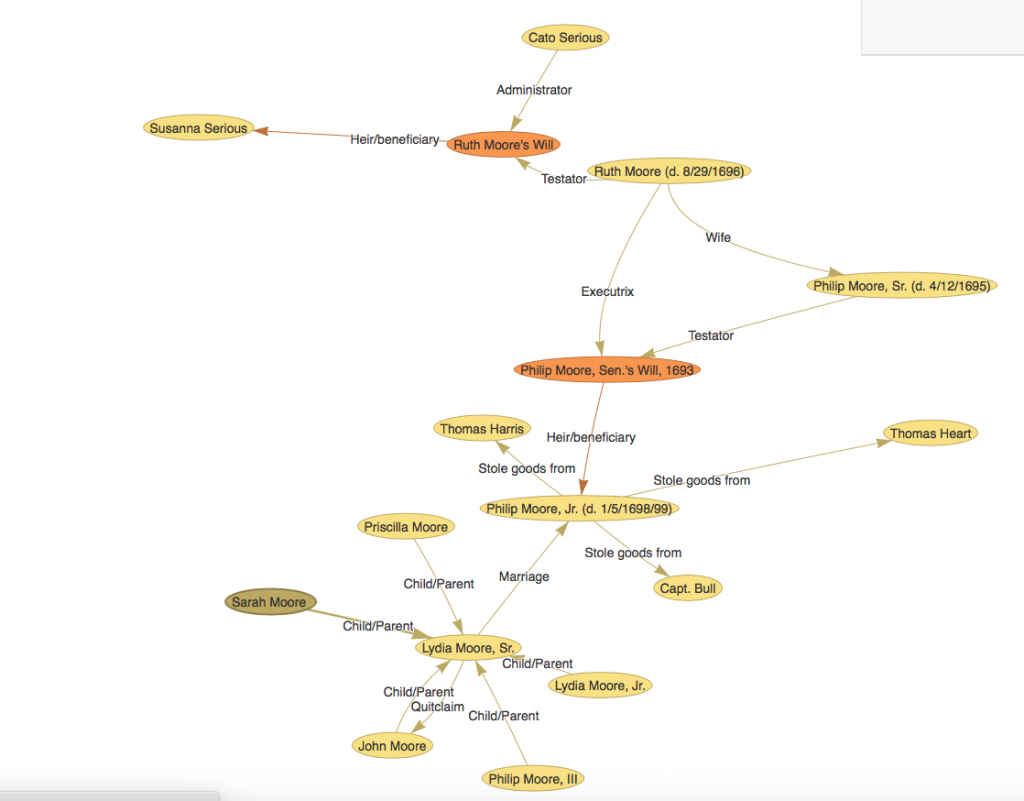 Phillip, Sr. was an enterprising man. He owned land in both Hartford and Hockanum (East Hartford). He willed his land in Hockanum to his daughter Susanna Serious (sometimes transcribed as Sesions), her children, and her husband, Cato, who worked for the Reverend Timothy Woodbridge under an indenture; his land in Hartford to Phillip, Jr. and his heirs.  Probably the father and son were farmers. Phillip Sr.’s estate inventory, valued at £99 in April 1695 shows that at his death he possessed eleven bushels of rye and two of “ingin,” or Indian corn (maize), a trammel, farm implements, a hammer, and wool, flax and yarn that may have been for his wife, Ruth, to use in making cloth. He had a mare, a cow, a sow and a pig, and nearly 47 acres of land that included an orchard and woodland as well as a home lot. Ruth passed away in 1696 not long after her husband, and she devised her estate to her daughter (she says “daughter-in-law” so perhaps it was a step-daughter), Susanna, and Susanna’s husband, Cato. 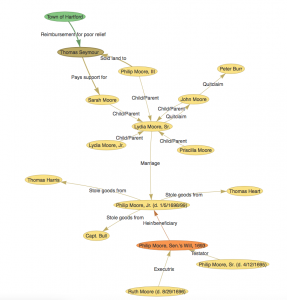 The Moore family seemed to be economically stable. They were literate, Christian people who were in most respects like their white neighbors.  On June 11, 1693, Rev. Timothy Woodbridge baptized Lydia Sr. and her sons at First Congregational Church in Hartford. Lydia became a full member of the church, also known as “owning the covenant,” at the same time. A little over a month later, on July 30, 1693, Rev. Woodbridge baptized all the girls except for Priscilla, whose baptism occurred in 1695.  Phillip, Jr. did not long outlive his parents, dying in January 1697/98 leaving a small estate worth about £50 that included linens, a cradle, a pewter platter, books and a bible. His land holdings encompassed woodland, a cleared parcel, and a homestead of about five acres but was substantially less than his father had had. His widow, Lydia, was thus left with children who probably ranged in age from infancy to their teens. 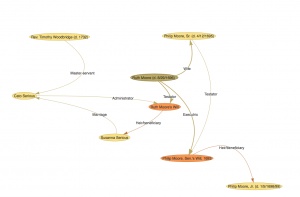 Membership in the church could not prevent economic hardship. Cato sold land in 1699, and in 1713 the first signs of poverty emerged. Sarah, who by this time had children of her own, was dependent on Captain Thomas Seymour for support. He applied to the town twice in 1713 and 1714 for reimbursement for his expenses and the town granted him eight pounds for “keeping” Sarah Moore and her family. In January 1717/18 Lydia Sr., quitclaimed a parcel of land to her son, John, who two months later quitclaimed it to Judge Peter Burr.[2] Rumors had circulated in 1717 that Connecticut might prohibit blacks from owning land. While that law never passed, its proposal may have prompted Lydia and John to sell to a white neighbor, perhaps even trusting him to keep the land for their use. Finally, though, Phillip III parted with his land in 1730 to the man who had once “kept” his sister. 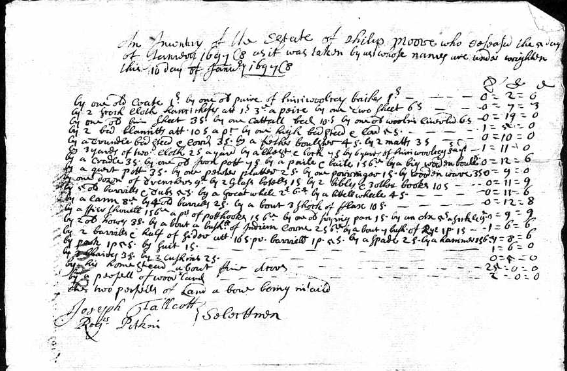 The family’s disappearance from Hartford is as mysterious as its appearance. For nearly 75 years these African Americans lived among the English colonists. Phillip, Sr. and Ruth may once have been enslaved, but their appearance in the records is as free people. Cato was indentured or bound in some way to Rev. Woodbridge for a term of years, but this was not an unusual situation for any colonist who was young and learning a trade or craft. Sarah’s unmarried status after giving birth to more than one child was unusual, but the population of free black men or even free Native men was low. Sarah would probably have been punished for fornication; if a father had been named, he would have been liable for support. That the town through Capt. Seymour supported her suggests no partner was able to be charged. Lydia, Jr. and Priscilla may have gone to work for other colonists or may have died. Phillip Moore, III, described as “a Negro or mulatto,” at a special court held in Hartford on October 6, 1707, was sentenced to hard labor in service for Caleb Watson for “Stubborn and Rebellious Carriage.” Moore was bound to Watson until he worked off his sentence and the fine Watson paid to the colony’s treasure.[3]

Often the Moores were not even described in the early records as “Negro,” which appeared next to the names of most other people of color. As neighbors and fellow church members, perhaps colonists thought it was not required. As slavery became more common in New England over the course of the late seventeenth to mid-eighteenth century, the racism that accompanied keeping human beings as chattel may have cemented as well. Few blacks by the mid-eighteenth century were able to live in Hartford as the Moores had in the seventeenth century. Not until the remarkable Venture Smith purchased himself out of slavery would Connecticut see an African’s success story like that of Phillip Moore.