The Minister’s Daughter:
The Story of Anne Foster Buckingham Burnham

Anne Foster Buckingham Burnham (d. October 5, 1764) was the daughter of Mehitable Wyllys and Reverend Isaac Foster, minister of the First Congregational Church in Hartford (Center Church). Her stepfather was Rev. Timothy Woodbridge, who also succeeded Foster as minister of the First Church.  Anne Foster’s young life was spent among the godly inhabitants of Hartford, and so it was fitting that in 1699 she married Rev. Thomas Buckingham, minister of the Second Congregational Church in Hartford. She and Thomas had three children, but Anne, Jr., lived only a few days, and Isaac, who graduated from Yale College in 1718, died just before taking his master of arts degree. Joseph, however, grew up and became a prominent lawyer, judge, representative to the General Assembly, and gentleman farmer. Anne’s marriage lasted 32 years, until Buckingham’s death in 1731.  She then wed her second husband, Rev. William Burnham of Kensington.[1] 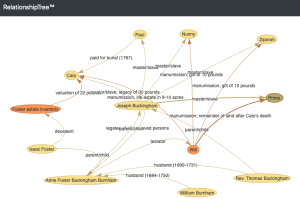 Anne had grown up not only among Hartford’s elect; she had grown up around enslaved people. Her father owned “a Negro called Cato” valued at £22; her stepfather, Rev. Woodbridge, owned several people while married to Anne’s mother, and when he remarried after Mehitable’s death, his new bride, Abigail Warren Lord, brought even more enslaved people into the household. Upon leaving her childhood home, Anne may have lived without other enslaved labor, but she did inherit Cato. Probate records for Rev. Thomas Buckingham are missing; her second, William Burnham, owned no people at the time of his death. Anne may have, by that time, given Cato to her son, Joseph. At the turn of the eighteenth century, Puritans had largely overcome their scruples about slavery, and Connecticut ministers were not antislavery. Massachusetts Superior Court Judge Samuel Sewall did author a pamphlet against slavery called “The Selling of Joseph” in 1700, but it seems to have had little influence.[2] In Connecticut, the number of enslaved people continued to grow.

When her son Joseph died in 1761, he was unmarried. He left an unfinished will, and his half-written and partially nuncupative (oral) will was challenged in court by his cousin, Rev. Daniel Buckingham and other potential heirs. The General Assembly overturned the ruling of the probate court, which had found for the challengers. Anne, now a widow, became the administratrix of the estate. She then inherited her son’s personal property, which included numerous enslaved people. Joseph Buckingham’s papers list Cato, Zipporah, Nunny (Nunicotoo) and an infant, and Paul, as being Joseph’s slaves. Joseph’s probated estate shows the enslaved people were given bequests between £10 (Dide’s son), £20 (Nunny, Dide) and £30 pounds (Cato, Paul). Buckingham, when he lived, had expressed concern about the precedent of freeing blacks set by Reverend Mather in New Haven, and the issue of manumission was on his mind. Masters often worried publicly about freed people becoming charges on the town or turning to a life of crime. Their paternalistic fears were about how to maintain social control over a population no longer under direct supervision.[3]

The identity of Joseph Buckingham’s enslaved man named Cato is in question. Joseph’s grandfather, Isaac Foster, owned a man named Cato who passed by will to Anne’s household. Cato in Joseph’s inventory may have been this man, or he may have been another, younger Cato.  After Buckingham’s death, Rev. Daniel Buckingham of Fairfield placed an advertisement in the New Haven newspapers for a runaway, Cato, about 45 years old, who had once belonged to Joseph Buckingham and was now working for Captain James Nichols. Rev. Foster’s man Cato would have been older than 45 in 1763. The runaway Cato could have been the elder Cato’s son, possibly with Dide, and he may have been sold or rented to Captain James Nichols. 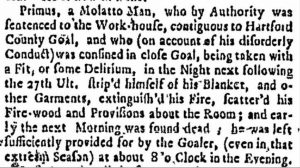 What Anne Burnham thought about slavery is unknown. She died in October 1764, in Hartford. Upon her death, Burnham freed the five enslaved people in her household: Paul, Cato, Zipporah, Nunny and Prime. In her will she gave Cato, Paul and Prime their own parcels of land of about eight to ten acres each, and she gave Zipporah and Nunny £10 apiece. Since Burnham was the sole survivor of her nuclear family, she gave the rest of her property and belongings to her extended family and the churches in Hartford.[4] She may have manumitted her slaves, because there was no one to leave them to, or she may have wanted to set them free. At the end of her life, only they were there to care for her.

After her death, the freed people cared for each other. Cato died in 1767. Paul paid for his burial. Paul, in turn, received Cato’s land when he died. But when Zipporah died, no one in the group was left. She died of dropsy at the age of 80 and was buried at the charge of the town.[5]