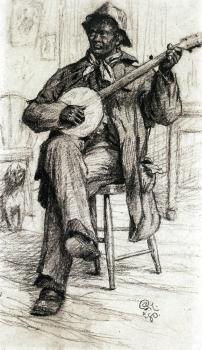 The Leveling Environment of the Sea:
The Story of the Dolphin Family

Men both free and enslaved in America often became seamen to escape their oppressive circumstances. During the American Revolution, enslaved men joined the Continental Navy with hopes to obtain their freedom. Enslaved people often served as proxies for their masters in the fighting with promises of manumission when they returned. There were other incentives as well, including land in Ohio and extra money for people who captured British ships.[1] Thus began a tradition in the late eighteenth and nineteenth centuries, when white, Native and black men served together on privateers, whaling vessels, and trading ships as marine commerce was expanding along the Atlantic coast.  The aptly named Dolphin family was one of the many families of color who found freedom of one kind or another on the seas. 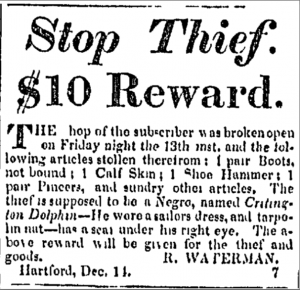 Most of the African-American freemen, like brothers Crittendon and Edward Dolphin, Jr. of Hartford, became seamen to earn more money.[2] Even though freemen did not always make as much as their white neighbors, most sailors were paid more than what they would have received working on land and were treated more fairly.[3] Seamen developed their own culture and distinctive appearance, one not based on race. The sun, their work and sometimes tattoos marked them as part of a unique group of men.[4]

Escaping to the high seas also came with its own set of drawbacks.  One of the major issues was that the British Royal Navy sometimes captured American vessels and impressed the men on the ship.[5]  Seaman’s Protection Certificates were created for this reason, and they listed the person’s name, physical description, and most importantly, their American citizenship.[6] As long as the seamen had the certificates with them the Royal Navy could not make the men work under the British flag, so they imprisoned the Americans.[7] If being captured by the British was not bad enough, freemen had to worry about the Vice Admiralty Courts, which had the power to make a freeman return to slavery, the very thing that they had escaped.[8] 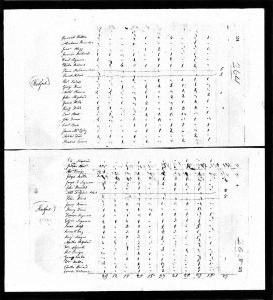 Ned Dolphin and his wife, Fanny, lived past the War of 1812. It is their children who populated Hartford’s Ancient Burying Ground, the ones who did not have the chance to make their lives at sea. One son, Ethan, stayed close to home and lived to adulthood. He had a daughter, Mary, who gave birth to one of Connecticut’s finest still-life artists, Charles Ethan Porter . The brothers who sailed off made lives elsewhere. For most black men who ventured out, the sea was a more hospitable place than land and offered more opportunity, but it meant disconnecting from family and friends back home, another Hobson’s choice of the kind African Americans had to make all too often.