The Gallows:
The Stories of Young Squamp, Waisoiusksquaw, Kate, Jack, and Barney

of sexual violence and torture.)

The Puritan reformers who settled Hartford were, by and large, against capital punishment, rejecting the common practice they left in England in which people could be executed for rather minor crimes. Nevertheless, they believed some offenses should be punishable by death, and they looked to scripture for authority. Capital offenses in Connecticut consisted of murder, manslaughter, rape, arson, witchcraft, adultery, idolatry, blasphemy, and other offenses covered by the Ten Commandments (Deut. 5:6-21). The colony executed few people for offenses other than rape, murder and witchcraft; crimes like adultery were usually punished with public shaming by making a person stand on the gallows without an actual execution.

When the colony chose to execute people, however, it did so publicly. The method of execution was hanging. The location of the gallows changed over time. Gallows were located in the meetinghouse square, where the Old State House is now. Before March, 1711/12, they were located at a place on Albany Avenue. Later they were moved to Gallows Hill where Trinity College is now (though the Trinity location was probably not used until the American Revolution). There was usually great ceremony attached to the proceedings. Ministers sometimes wrote execution sermons, delivered minutes before the prisoner dropped to his or her death and later published so the message could be spread. In Connecticut, most of those executed came from the lowest rungs of society—Indians, enslaved people, those of mixed racial backgrounds, and women.

On three occasions in its history, Connecticut decided to execute multiple people at the same time. The first was a witchcraft panic in Hartford in the 1660s. The other two instances involved two Native people in 1711 and two African Americans in 1743.  All of these group executions were meant to instill fear in the population, and to communicate the power of the state.

In December 1710, Young Squamp, an “Indian man of Hartford,” went to Hoccanum (now East Hartford) to a market, where he wanted to trade for hardware. He met Mantoshoes, and the two argued. Young Squamp pulled a knife and stabbed Mantoshoes, a fellow Wangunk. Young Squamp was immediately arrested and charged with assault, but when Mantoshoes died a week later, the charge was changed to murder. The trial was delayed for five months, perhaps to make sure that a mixed jury could be convened. Keepequam and other Native men were assembled to join with colonists on the jury. On May 8, 1711, Young Squamp, was indicted for the murder of Mantoshoes. The jury returned a swift verdict and sentenced him to hang on May 11. 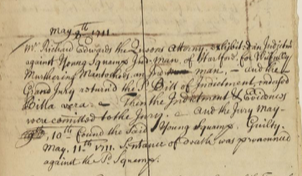 In April 1711 while Young Squamp was still in jail, an “Indian woman of Groton,”  whom the colonists dubbed Waisoiusksquaw (the wife (“squaw”) of Waisoiusk), was indicted for killing her husband by disemboweling him with a butcher knife. She, too, was tried on May 8 and sentenced to die on May 11 by the same mixed jury that judged Young Squamp.[1]  When their corpses were cut down from the gallows, their families could have claimed their bodies and taken them for burial elsewhere, but in all likelihood Young Squamp and Waisoiusksquaw were buried in the Ancient Burying Ground.

The hanging of two Native people in one session of the court undoubtedly shook the Native communities in Connecticut. It had become common for Native people to reside just outside of colonial towns, often in squalid conditions. Native men were returning from military campaigns during Queen Anne’s War, and some found it hard to find employment. Even Native men who came from leading Native families could find themselves impoverished and forced to sell land. The Wangunk community, which was based in Middletown but still had families living in Hartford and Wethersfield, among other places along the river, had begun to exhaust its resources. The trials of Young Squamp and Waisoiusksquaw were among the last in which the colonial authorities employed a mixed jury.

The next cluster of hangings occurred in 1743. Pregnancy out of wedlock was not a particularly unusual condition in colonial Connecticut, and for enslaved women, it was commonplace, because marriage could occur only with masters’ permissions. Kate, an enslaved woman in the household of Thomas Belding of Wethersfield, became pregnant and delivered a baby boy in April 1743. The next day she allegedly strangled the baby with a curtain sash. Her mistress realized she had given birth and conducted an examination of Kate’s body, including feeling her breasts for milk. A search of the house turned up the body of the infant. The boy’s father was never named in the case files, and the father’s race is also unknown.  Kate remained in jail until her trial, September 12. Infanticide was punished harshly when women tried to hide their sin by destroying the child, and in that Kate’s prosecution was no exception. It was unusual that no father was named, and it is quite possible that Kate herself was the victim of a sexual assault. Found guilty, she awaited execution on November 16, 1743. 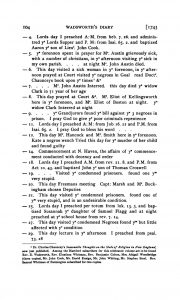 A few months later, in June, an enslaved man named Jack, who lived in New York and who had come to Middletown on business for his master, accosted a woman near Haddam. The woman, Hannah Andrews (Andros), was traveling on horseback alone. Jack sexually assaulted her and then beat her until she was almost dead. His rage was evident in his words to her, “Now you will have a black bastard!” Hannah was able to crawl out of the woods where Jack had taken her and summon help. Jack was arrested and charged with rape. He, too, was placed in jail until his trial in November 1743. 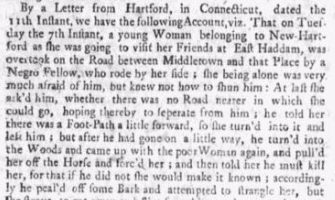 Perhaps it was rage that the colonial authorities recognized in the crimes of Kate and Jack. They certainly took notice of rage when Barney committed his crime. Barney was a teenager being raised without parents or even fictive kin in the household of Jonathan Allyn of Middletown. What compelled Barney to act on that May day in 1743 went with him to his grave, but in an act that shocked the entirely colony, Barney cut open the genitals of a six-year-old boy, Thomas, the son of Mr. Allyn. He left the mutilated boy for dead, but townspeople found the boy bleeding in the field eight hours later. The boy identified Barney as his attacker, and he was arrested. The colony struggled to find a law to fit the crime, and the prosecution settled on willful castration as the charge after a special session of the General Assembly enacted, ex post facto, a law allowing the court to proceed as it saw fit. As historian Lawrence Goodheart noted, “the emasculation challenged white male dominance.”[2] Barney, too, awaited trial with Kate and Jack. 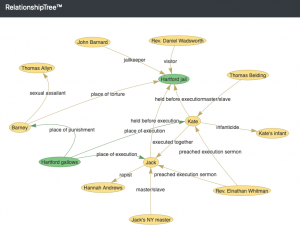 The Executions of Kate and Jack, and the Torture of Barney

Each of these crimes was horrendous and seemed “barbarous” to the colonists. Ephraim Andrews, Hannah’s husband, referred to Jack as “an inhuman Negro.” Rev. Daniel Wadsworth, who had visited Kate and Jack, wrote on the day of their executions, “May it be a warning to others.”[3] Yet each of these crimes was also a challenge to colonists’ own barbarity. Kate was pregnant, perhaps against her will, by a father she could not name, from whom she could not expect support or any semblance of family life. She was so traumatized, she was in denial about her crime. Jack was a man from whom all power had been taken. When Mrs. Andrews begged for mercy, Jack was so full of anger he kicked her in the head. Barney, taken from his parents as a young child —perhaps as young as Thomas Allyn was when Barney cut him up— was already numb to violence at the age of 16. The colonists were in no mood for self-examination, however, and they made sure they got retribution. 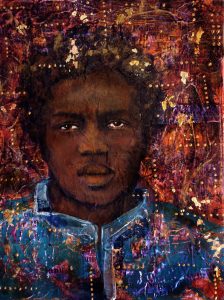 On September 12, the jury returned verdicts of guilty on all of the defendants, who were unrepresented by counsel. Kate and Jack were sentenced to hang on November 16, 1743. Barney, though, was sentenced to stand on the gallows and watch the hangings of Kate and Jack. Townspeople threw stones and other objects at him. After his hour of being pelted on the gallows, Barney was whipped 39 times, taken to a cell where he was chained for a month and fed only bread and water. Then the whipping was repeated. On January 11, 1744, Barney was taken from his cell to the gallows where the executioner, using hot pincers, tore off his genitals. While his death is not recorded, historians believe he could not have survived this torture.[4]

The authorities made a spectacle of these executions. Their power had been challenged. As Goodheart argues, the cases against African Americans and Native Americans in the first half of the eighteenth century were creating a “Yankee justice,” with race playing a “pivotal, but not exclusive, role.”[5] While at the start of the century Native defendants had interpreters in the court and members of their own tribes on the jury, later trials removed those safeguards. Enslaved defendants were not provided attorneys, and Jack was not advised by anyone before he entered a plea of guilty. Instead, the trials and hangings of Native and enslaved people served as warnings to those populations to fear colonial justice if they strayed off the right path.