The Eyes of Injustice:
The Story of Hannah Duce

(Content warning: This narrative includes an episode of sexual violence.) 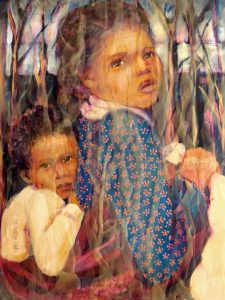 Life for those enslaved in seventeenth-century New England included many hardships and frequent injustices. Families in Africa were torn apart as members were forcibly moved across the Atlantic, often landing first in the Caribbean before being relocated. Masters sold and traded them without any regard for individual well-being or preservation of dignity as fellow human beings. One woman subjected to such treatment was Hannah Duce, who came to work as an enslaved household servant to Thomas Richards. In the spring of 1673 two white men, John Ginnings and William Hadwell, sexually assaulted her. These men raped her, and she bore a child from the encounter.[1]

According to the colony’s law the court should have severely disciplined those men for their actions, but because Hannah was enslaved, the judge did not see the act as a crime against her. Instead, the court charged all three people involved with fornication, or having sex before marriage, a crime in the eyes of the colony and a sin in the eyes of the Church. The defendants were given the option either to be publicly whipped or to pay a fine.  People of higher social standing could opt for the more lenient sentence of a fine. Poorer folk often took the whipping.  Since slaves were at the bottom rung of the social ladder, they could not escape the public shaming and physical brutality involved in punishments. Hannah was ultimately whipped. Ginnings and Hadwell, in addition to paying the fine for their fornication, were ordered to pay a one-time-only child support fee of four pounds each.[2] Hannah considered Ginnings the father of her child. She (or possibly Richards) named her son Abda, a Hebrew or Arabic name that meant “servant.” Even though he had a white father, his master considered Abda enslaved because of his mother’s status.[3] 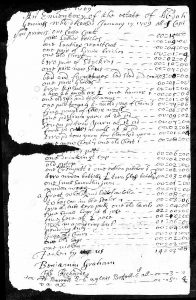 In 1703, Abda sued for his freedom and after a convoluted court case, Richards freed him.[4] Hannah may not have lived to see her son’s freedom, or his marriage to Lydia and the birth of their son, Joseph. Her son, at his death in 1709, was renting a home with his family. They inherited his possessions, including a violin.

Abda’s son, Joseph, died eighty years after his father. He owned a few items of clothing and a house.

The house was of little value, but it was a home of his own. When he was 16 years old, Joseph chose Thomas Stanly of Farmington to be his guardian. He spent his young life indentured and his adult life in poverty, but he lived outside of the bonds of enslavement. Hannah’s endurance, Abda’s courageous lawsuit, and Joseph’s struggle as a free man of color demonstrate the harsh world of racism in which they lived and the strength it took to persist in spite of it.

[3] In 1 Kings 4:6, Abda was the father of Solomon’s chief who oversaw the team of forced laborers, and in Islam, Abdah referred to one of seven possible companions of the Prophet Muhammed; the last name, Duce, could be an English form of Douses or Douce, Charles Wareing Endell Bardsley, Our English Surnames: Their Sources and Significances (London: Chatto and Windus, Pub., 1873), 60, or it could have had a Spanish or African origin.  “A Fugitive Slave Case in Connecticut,” Hartford Daily Courant (1840-1887), Nov. 9, 1850; Charles William Manwaring, ed. A Digest of the Early Connecticut Probate Records: Hartford district, 1700-1729, Vol. 2 (Hartford: R.S. Peck & Company, 1904), 58.