Family Structure Among Captive People:
The Story of Andrew and Tamar 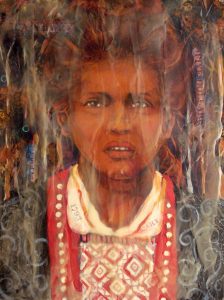 Colonial law gave masters of enslaved people absolute power over the structure of families.  When one of the wealthiest men in Hartford, Richard Lord, died in 1711, his estate, which included enslaved people, was divided between his wife and seven children.  In his will, Richard gave his widow, Abigail, a slave named Andrew.[1] When Abigail remarried she brought her children, land, capital and enslaved people to her new family with Rev. Timothy Woodbridge. It was through this merger of families that Andrew began his relationship with Rev. Woodbridge’s enslaved house maid, Tamar, a Christian who became a church member when she “owned the church covenant” in May 1705.[2] In 1720 the couple was punished in the county court for fornication and had to endure twelve stripes on their naked backs or pay a fine of 20 shillings each. Andrew and Tamar married in 1721 and had three children: Lydia, Isabella, and Daniell.[3] We do not know whether Andrew and Tamar felt love for one another or whether the marriage was imposed on them. No records remain to document whether their family life was a comfort to them or a trial. In some cases, such as the union of the enslaved couple Pomp and Susannah, it is clear from the record that their master, Capt. William Nichols, forced them to marry. Since Lydia was born out of wedlock in 1720, it is possible the Woodbridges insisted on a marriage or Tamar’s Christian faith may have been a factor. Isabella was born in 1721 and Daniel in 1722.

Just as frequently, separation of enslaved families also occurred through gifts, inheritance, marriages, and sales. In May 1723 Abigail Woodbridge’s son, Elisha Lord, married Mary Haynes. Elisha died in 1725, but sometime during his short marriage, Abigail transferred ownership of Andrew, Tamar, and their son, Daniell, to her son. It is likely the enslaved family was a gift to the newlyweds. As the Rev. Cotton Mather said, “You take them into your Families; you look on them as part of your Possessions.” The Lords and Woodbridges did just that.

Elisha Lord’s inventory, 1725, with valuation of Andrew, Tamar and Daniell

Andrew and Tamar’s family was further separated when Rev. Woodbridge died in 1732 and willed their eldest, Lydia, to his own daughter, Susannah Treat.[4] Lydia rarely if ever saw her family as the Treats moved frequently between Massachusetts, Connecticut and New York. At the time of her separation from her parents she was just twelve years old. Daniell remained with the Woodbridges until Abigail died and he was bequeathed to her son, John Haynes Lord. Daniell died in 1761, still enslaved. Isabella’s fate is unknown. Even though Andrew and Tamar’s family had an amount of stability rare in the colonial period, they experienced the pain of separation and a lack of autonomy over the most basic and intimate parts of their lives.