Debt and Death:
The Story of Dr. Jepson’s Household 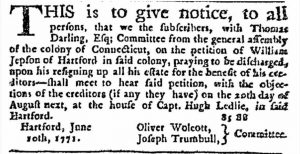 Not all of the colonists who purchased enslaved people could afford to keep them. Such was the case of Dr. William Jepson, who came from Boston to live in Hartford in the 1760s. William Jepson was born 1733 in Boston, where he trained in medicine, joining the army as a surgeon during the French and Indian War in 1755. Early in his career, Jepson practiced operations on people who were enslaved.  He later owned several enslaved people throughout his lifetime, and he either sold them or they died while they were with him. His fiscal insecurity made life rocky for him and his wife, but it made it absolutely dangerous for the members of his household in perpetual bondage.

Jepson gained recognition in the town not just for his apothecary store, but also for performing medical procedures known as lithotomies.[1] Although Jepson occasionally traveled throughout the colony to perform his operations, he kept a store in Hartford. An explosion at a school house in 1766 during celebrations for the repeal of the Stamp Act injured William Gardiner, a merchant and Jepson’s partner, breaking both his legs. Many others died, and Jepson was called in to treat the wounded, including several black people. 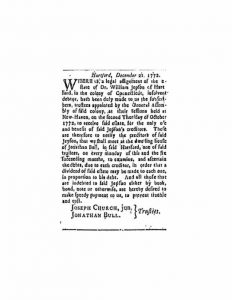 Jepson’s financial troubles were not new. He lived beyond his means, spending a small fortune on books. Soon after arriving in Hartford, enslaved people in his household began to die. The first known death concerned a woman named Dinah. No known record exists that determines Dinah’s age at death or how long she had been with Jepson. She died September 8, 1760 and Jepson paid for her interment in the Ancient Burying Ground. The date of Dinah’s death suggests she came with Jepson to Hartford from Boston. A few years later, on April 9, 1764 a female infant enslaved by Jepson died. The records listed this unnamed enslaved child as a “Negro female infant.” [2] She may have died before her parents or master named her. Shortly after the schoolhouse explosion, Jepson placed a notice in the Connecticut Courant trying to collect the money people owed him and asking people who had borrowed his books to return them.[3] Another of Jepson’s enslaved children, a male child, died on August 29, 1767. This child died with no known record of a name or an age, and the record lists him only as a “male Negro child.”[4] While eighteenth-century New England had higher child mortality than today, the deaths in Jepson’s household indicate persistent health problems. As a doctor, he ought to have been better able to treat them; as a debtor, he may have been unable.

By 1772, after the death of his first wife, Jepson was so heavily in debt, he went bankrupt.[5] As creditors closed in, he shifted his residence. He moved from his own house to Deacon Daniel Bull’s on Tanner’s Lane, west of the town bridge.[6] When Jepson went into bankruptcy, any enslaved people he kept he may have sold to cover his debts. One known record may confirm this, that of a girl for sale on February 23, 1773. His troubles continued. In 1779 he lost a beaver hat and advertised to get it back, probably because it was valuable in addition to warm. The incident suggests Jepson did not curb his appetite for fine things, which in turn led to more problems. One year later he put an unnamed fifteen-year-old boy up for sale.[7]

Jepson died at the age of fifty in 1783. The probate inventory taken after his death lists no enslaved people in the estate. His widow spent 7 pounds on her mourning dress, and one pound on her husband’s coffin. His grave was dug for 9 shillings. A headstone and footstone were set aside for him, but it is not clear that they were ever paid for or carved. In 1784 his widow sold his surgical instruments, and a few years later, she remarried.[8] 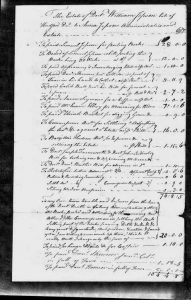 William Jepson’s descent into financial ruin shows a troubling phenomenon when looking at early colonists’ enslavement of Africans and African Americans. When Jepson went bankrupt, he sold some enslaved people, perhaps away from other family members, but at the very least away from the only other people who knew them. If Dinah came with Jepson from Boston, she may have left behind family, fictive kin or friends. The issue of family separation looms heavily over the institution of slavery, where enslaved children and their parents faced instant and final separation from one another without their consent and entirely at the whim of their enslavers. And unfortunately, because of the status of enslaved people as property and not as fully human beings under the law in early Hartford, their lives are not easily traced and or events confirmed by records. As such, what remains of their lives exists in fragmented form, with many details left unknown. The brokenness of the record reflects the broken state of their human rights in the colonial era. 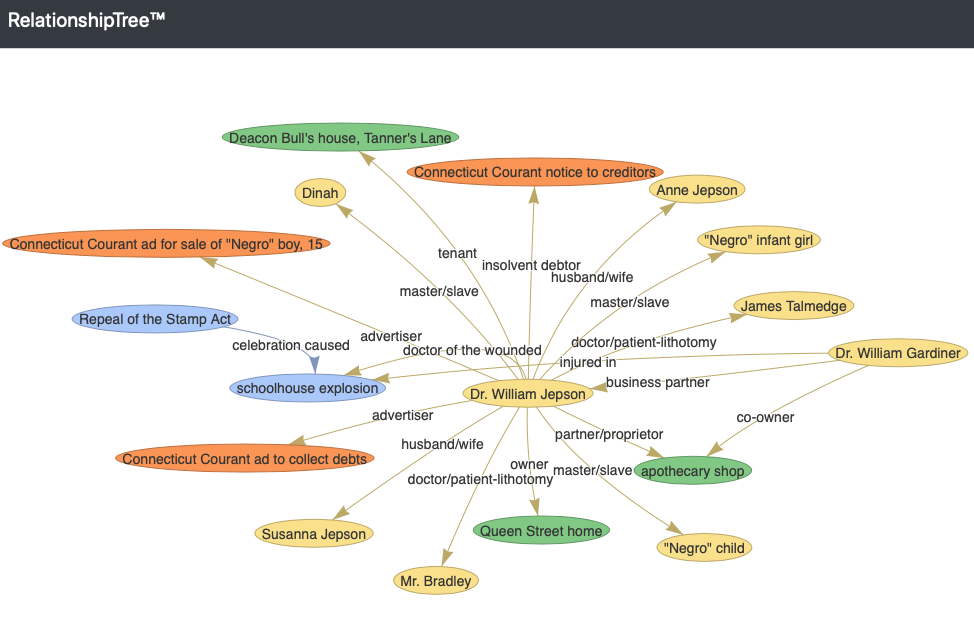