You have entered a site devoted to research about and remembrance of colonial Hartford’s least visible population: the Native, African, and African-American people who lived, worked and died here. Our President, Ty Tryon, has written a message we invite you to read, explaining the history and purpose of the project. We then invite you to explore this website. We have features for the K-12 student, the college and university student, the family genealogist, the scholarly researcher, the interested member of the public and the merely curious. Our goal was to make all of our findings accessible and usable, and to honor the lives and deaths of hundreds of people who have no other public marker of their time here.

The Ancient Burying Ground is Hartford’s oldest historic site and the only one remaining from the seventeenth century. From 1640 until the early 1800s, it served as Hartford’s primary graveyard. During that period, anyone who died in town, regardless of age, gender, race, ethnic background, economic status, or religious faith, was buried here. Approximately 6,000 people are thought to be buried in the Ancient Burying Ground including an estimated 300 Africans, African Americans and Native Americans. Those named and unnamed individuals are profiled on the website in several ways, as individuals and in collective narratives. Ancestry.com family trees are linked where possible. There are also RelationshipTrees that we have developed to show connections between people that are not based on family ties. Artwork by Cora Marshall depicts what the people may have looked like, based on descriptions in newspapers and other documents. 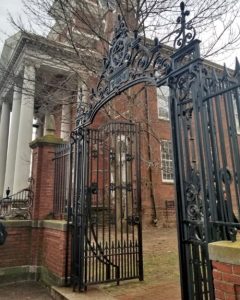 Gates to the Ancient Burying Ground on Main Street

Start by selecting someone from the list of names  ⇒

Next you will see a profile. Click on links embedded in the profile to an Ancestry.com Tree and a RelationshipTree™️

Next you can visit a narrative about Phillip Moore’s family from our selection of narratives.

Note: if you don’t already have an Ancestry.com account, you can get a free trial or you can access Ancestry.com from the Connecticut State Library.

We hope you enjoy your foray into Hartford’s Native, African, and African-American past.

Uncovering Their History: African, African-American and Native-American Burials in Hartford’s Ancient Burying Ground, 1640-1815  is a project of the Ancient Burying Ground Association, and was funded in part by the Connecticut State Historic Preservation Office of the Department of Economic and Community Development with funds from the Community Investment Act.